Prime Minister John Bricenoto left the country on Tuesday and is due to return on January 17th. During his absence, the Minister of Natural Resources, Petroleum and Mines exercises the functions of Prime Minister and Minister of Finance and Economic Development. But these additional duties did not prevent Minister Hyde from making a scheduled visit to Dangriga, where the first in a series of consultations is taking place. This‘s an effort undertaken by the Lands Department to provide administrative services to process land documents for ordinary Belizeans. News Five’s Duane Moody reports.

For decades, the process of acquiring land – whether it’s a lease or a title – has been frustrating. Many would travel to the Land Department in Belmopan to run around and spend hours in the sweltering heat just to be turned away, while a privileged few would have easy access to services. 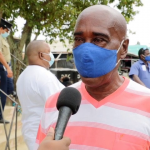 “Look yeah. I applied fi wah piece ah land when I was twenty-one. I get land in town because I squat it – Wageirale. I’m squatting this. Now I have a piece of farmland and I don’t have to squat.

Martinez, a popular Belizean artist, was among hundreds of residents of Dangriga constituency in southern Belize, including the villages of Sarawee and Hope Creek, who visited the culture capital city council office. to get the opportunity to get started and in some cases enter into deals to own land. 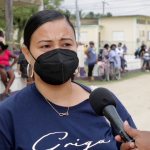 “They disinfect themselves twice before going up to the town hall where consultations take place with the various members of the staff of the ministry so that is what is happening. We had to explain to them that he would be back because it is only the first of the series for him to come here to serve our people here in Dangriga; Sarawee and Hope Creek by extension. And so he’ll be back next week and we’ve explained that to them and since then you’ll notice the crowd started to leave. So that’s a hundred and fifty issues that we’re giving out and then next week he’ll be back and we’ll make that announcement and he’ll serve another 150 until he sees as many people as he can.

This is the first in a series of consultations led by Natural Resources Minister Cordel Hyde to bring the administrative services of the Land Department to the people, for whom, as born Belizeans, a piece of the Jewel is their birthright. 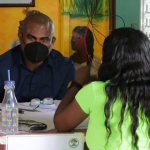 “It was clear to us from the start that people find it difficult to navigate the whole tedious process of obtaining land or applying for land, and especially ordinary people. Fat guys have the power to get things done and ordinary people don’t. And so we thought a long time ago that we really had to go out to people. At the end of the day, we have to bring it across the country; we have to make sure that people in every nook and cranny have the opportunity to own something so that they can lift themselves out of poverty and ensure that their children move on with all the extra opportunities that come with being possession of land.

While coordinators say over a thousand people attended, only 150 would be processed today, much to the disappointment of many. But Minister Hyde says the team is returning to Dangriga next week. So where will the sought-after land come from? 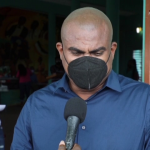 “Dangriga faces the same problem that we have in Belize City; there is no national territory, basically they are all gone. So at the end of the day for the residents of Dangriga to get land in Dangriga, we will have to acquire land – we will either have to buy it or compensate the landowners with land elsewhere and that will take a little while. Right now we have land in some of the surrounding villages and are making it accessible to the people here and they are more than willing to take it. “

As the locals walked out of town hall, their excitement was felt, even as the documents in their possession were only a first step in the process of acquiring a leasehold land. 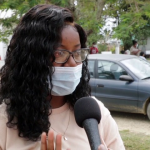 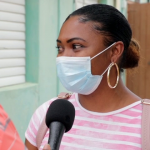 “I’m all excited. I’ve applied a fi wa land for a long time and I’m still not getting any. Now I’m in the process, so I wait for Dehn to call me and then they approve.

People can now get land services from home, says PM